Twenty years ago, one need only mention the word “coconut” to elicit gasps, shakes of the head, and wagging fingers from one’s acquaintances. It seemed like every dietary association, physician, and health magazine across the country had framed the tropical fruit as a ticking time-bomb of heart disease—after all, coconut contains more of the purported “artery-clogging” saturated fat (at 90% of its total fatty acid content) than is contained in butter, lard, or even beef tallow. Accordingly, the US Dietary Guidelines have strongly advised against the intake of saturated fats in our diets (the current recommendations stand at twenty grams per day), citing research that shows possible correlations between saturated fat consumption and higher incidences of atherosclerosis and cardiovascular disease. However, recent studies have revealed that not all saturated fats may be as harmful as was once believed; in fact, the saturated fat contained in coconut may actually serve to elevate the fruit to the status of our newest recognized “superfood.” 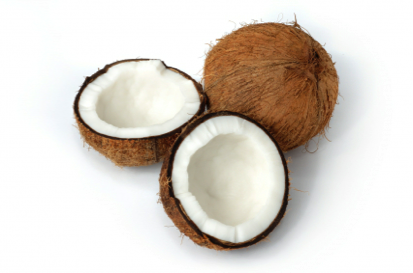 Pinpointing the risk factors to certain health conditions has never been an easy, nor a completely feasible, task. Our understanding of the effects of genetics, diet, and countless other environmental variables on human health is a work in progress and nowhere near comprehensive enough to provide explanations for all biological phenomena we observe. For example, scientists have argued for years that high levels of LDL—the purported “bad” type of cholesterol—indicate an increased risk for heart disease. As more in-depth studies have been conducted, however, researchers have suggested that it is actually the ratio of LDL to HDL—the so-called “good” cholesterol—that is more indicative of risk.

Where do coconuts come into the picture? Well, as scientific research has evolved, so has our understanding of the chemical composition of saturated fats. We now recognize the existence of several different types of saturated fatty acids—long-chain triglycerides and medium-chain triglycerides being the most prominent forms—and have come to the realization that not all saturated fats are created equal. In short, we shouldn’t be so quick to demonize this group of organic compounds.

Medium-chain triglycerides (MCT’s) are the major component of saturated fat in coconuts. Unlike long-chain triglycerides (LCT’s), MCT’s consist of a relatively short hydrocarbon chain, which allows for easier and more efficient digestion, absorption, and transport by the body. Some evidence has been found demonstrating that the body utilizes MCT’s primarily as metabolic energy, rather than converting them to adipose (fat) tissue; in this sense, MCT’s are treated more as long-lasting carbohydrates than as fats. In addition, certain forms of MCT-derived metabolic by-products, known as “ketone bodies,” are actually one of the preferred sources of energy for the brain, and have been shown to significantly relieve memory-related symptoms of Alzheimer’s disease.

What is perhaps the most surprising—and important—finding concerning these particular fatty acids, however, has to do with their relationship to cardiovascular disease. As was mentioned earlier, it appears to be the ratio of LDL and HDL in the bloodstream that affects one’s risk of developing heart disease, rather than their absolute values. Preliminary scientific evidence has demonstrated that the MCT’s contained in coconut do not merely elevate levels of LDL, as was previously assumed, but also raise the levels of HDL. In fact, a number of researchers now believe that the body’s ratio of LDL to HDL in the bloodstream is beneficially affected by dietary intake of MCT’s. 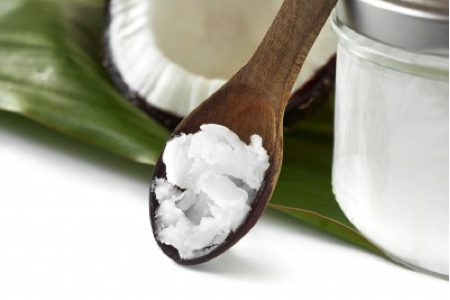 What does this mean? Well, while the evidence is by no means conclusive, there exists a growing portion of the scientific community who now believe that moderate consumption of unprocessed coconut may help to decrease one’s risk of developing heart disease. Of course, we must be wary of becoming too “reductionist” in our overall approaches to health by structuring our diets around purported “miracle” foods or nutrients—the key to long term health does not lie in taking fiber supplements, eating four bunches of kale per day, or adding in a tablespoon of coconut oil to a diet primarily based on processed foods. Rather, it is of vital importance that we as a population recognize the value of a balanced, diverse, and minimally processed style of eating. In this case, go ahead and add a spoonful of coconut butter to your morning oatmeal, a can of coconut milk to your curry, and a drizzle of coconut oil to your pan of roasted vegetables. The addition of a moderate amount of coconut may very well serve to augment the health benefits of a whole foods-based diet. 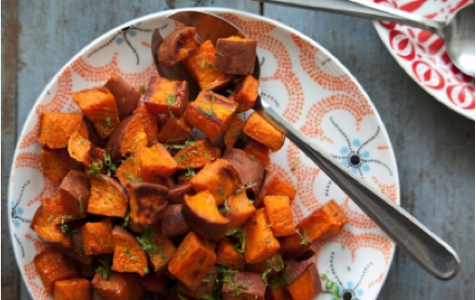 Set oven to 400°F and rinse sweet potatoes, peeling if desired. Chop into small pieces, approximately ½ inch to 1 inch in diameter. Melt coconut oil by microwaving jar for twenty seconds (watch carefully) or by placing jar in a bowl of hot water. In a large mixing bowl, combine cubed sweet potatoes, coconut oil, and a pinch of both salt and pepper (may also add other spices—cinnamon, thyme, even ground mustard—if desired). Toss to combine.

Line a baking sheet with parchment paper and evenly distribute the potato pieces across the sheet. Roast in over for 40 minutes, or until potatoes have browned and can be easily pierced with a fork. Enjoy!