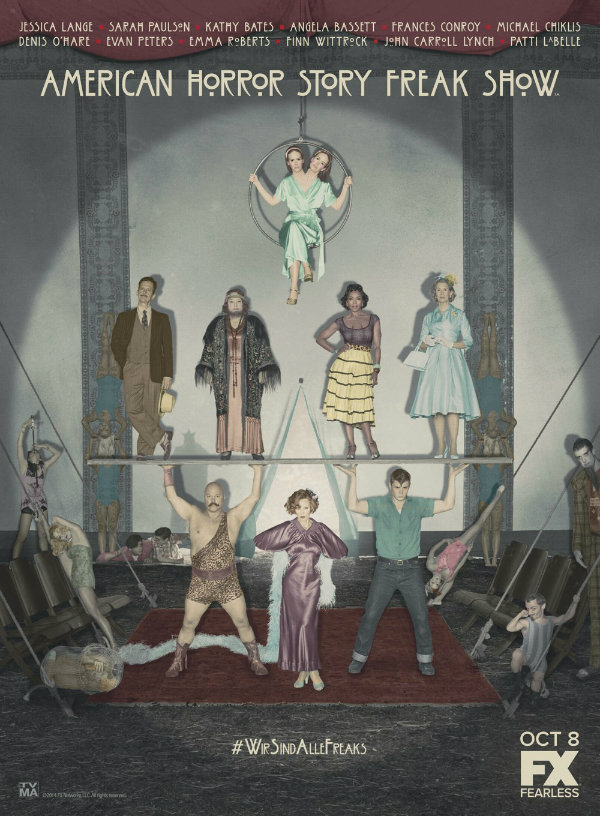 Sometimes I sleep with a light on because I get creeped out at night. As a child, I was traumatized by haunted houses on the boardwalk, haunted hayrides, and that time my friends made me watch “The Ring” and “The Ring Two” in the same night, as well as another time they showed me episodes of “The Twilight Zone” in sixth grade. I am still unreasonably freaked out by anything that is meant to be mildly scary. I watched “The Sixth Sense” for the first time over the summer, and even that was a little over the top for me.

I’m revealing this information because I want this statement to be as meaningful as possible: I love “American Horror Story.”

It’s not that this show isn’t scary, because it is. While I find no joy in productions that are created with the sole purpose of scaring the pants off of you, I absolutely love when books or movies with legitimate plots have creepy elements.

Since it can appeal to someone horror-sensitive like me, it’s no wonder that this show has become one of the most popular on TV. Each season of “American Horror Story” is separate storyline, a generally consistent cast playing different characters in each season’s new setting. Season one was about a modern day “murder house,” season two centered around an asylum in the 1960s, and season three featured a modern witch coven in New Orleans.

The show is coming back with its fourth season, called Freak Show, on October 8th. I’m more nervous than excited, and I’m pretty darn excited. While I found the first two seasons to be smart, entertaining, and full of twists that caught me off guard, somehow the magic was lost in season three (though fans’ personal opinions on the seasons widely vary).

A season full of witches and girl power had potential to be incredible, but it was really, really awful. With huge plot holes, a lack of character development, inconsistent rules about how the universe even worked, and a weak, muddled main plot, watching almost every character get arbitrarily killed off only to make a miraculous return a few episodes later exhausted and bored me.

Along with all of that, it wasn’t even scary enough. The suspense and twists that characterized the first two seasons just weren’t there. I’m hoping that the last one was a fluke and this season will be one of redemption.

“American Horror Story: Freak Show” will follow a struggling carnival group composed of outcasts in the 1950’s. From what I gather, they’ll be trying to keep the faltering business afloat as they deal with whatever creepy stuff is going on. Due to the show’s mainstream popularity, the trailers, photos, and clips released in anticipation have been everywhere. These all give away very little about the actual plot, but creator Ryan Murphy has hyped up a killer in this season as one of the scariest characters that has appeared on the show.

There are, thankfully, many returning characters playing the “freaks,” including Sarah Paulson as a two-headed woman, Kathy Bates as a bearded lady, Angela Bassett as a three-breasted woman, Jessica Lange as yet another badass matriarch, and a lobster-handed but otherwise hunky Evan Peters. Newcomer John Caroll Lynch will play, of course, an evil clown murderer.

So yes, it all sounds terribly cliché. While I don’t claim that the first two seasons are the best television ever produced, I do think that the creators of this show have a knack for making the cliché horror tropes refreshing and enticing. I still have a lot of hope for this season, and with any luck the episodes to come will not disappoint the show’s fanbase.