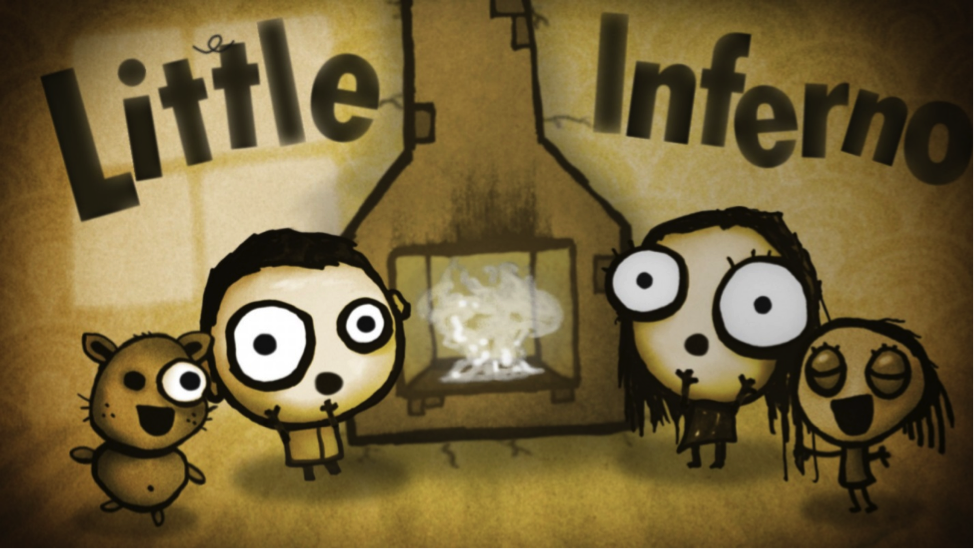 Little Inferno may be the strangest game I have ever played. It is many things, and at the same time, nothing. It’s hard to explain. I don’t even think I had fun playing it, and yet I still enjoyed it. Or maybe appreciate is the better word for it. It is definitely an art game, and difficult to recommend. If you’re looking for something distinctly game-y, like Tomorrow Corporation’s previous work (World of Goo), you will be disappointed. If, however, you are not looking for anything, you should play this game.

Shortly, here is the premise of the game, which is told through letters you receive from several people, including: your neighbor, the adorably eccentric Sugar Plumps; Nancy, the CEO of Tomorrow Corporation (the fake company that shares the developer’s name); and the weatherman, reporting the weather from his balloon. The world is extremely cold and getting colder. The snow never stops, and nobody can remember it ever not snowing. Everyone is advised to stay inside by their “Little Inferno Entertainment Fireplace” by Tomorrow Corp. Players throw stuff into the fire (mostly toys), get coins, purchase new things from the catalog, throw those things into the fire, and so on. Seems pretty mindless, doesn’t it? Well, that’s sort of the point.

There has to be some sort of progression, though, or else it wouldn’t be a game. As several characters point out, “But you can’t keep doing this forever.” By burning two or three specific things at once, you can make combos. Most of these are pretty easy to figure out, such as Bike Pirate, which you get by burning a bike and a pirate doll. There’s not a whole lot of challenge to these puzzles, but I didn’t even really care about them. In fact, for most of them, I just looked up the combinations. Yeah, yeah, shame on me or whatever, but I really don’t think the puzzles are the important part. That’s not what this game is about. Sure, you have to figure out combos to unlock more catalogs to buy more stuff to burn. But the combos themselves aren’t what matter—this game goes deeper than that.

And while I was waiting, instead of doing something meaningful, like actually talking to people in real life, I just stared at the screen and watched this fake fire engulf toys I didn’t care about to keep my character warm. That’s when I realized–I’m not having fun playing this game. But I can’t stop.

Perhaps if it were an ugly game, I would stop. But it’s beautiful. The art style reminds me of something between Dr. Seuss and The Nightmare Before Christmas. It is whimsical and childish, similar to World of Goo, but also incredibly creepy and dark. It is easy to see where all the time the developers spent on this game went toward. The fire effects, the way things slowly burn, turn to ash, and crumble, never really gets old. That’s saying a lot of a game in which you stare at a fireplace the whole time. Well, almost the whole time. But I won’t spoil anything here. 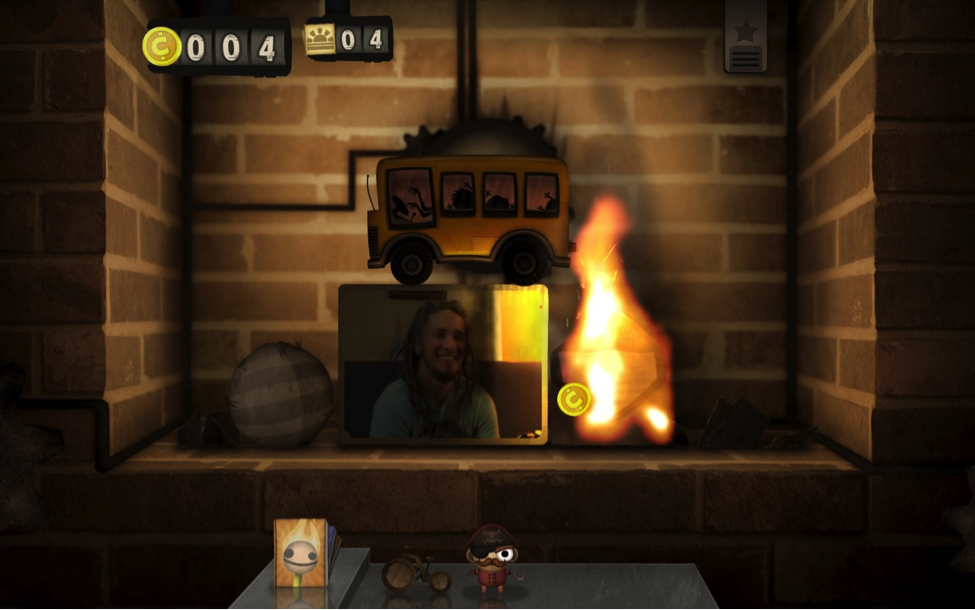 And as for the creepiness, it can be borderline disturbing. One item you can buy is a miniature bus filled with kids. When you burn it, you hear the kids screaming for their lives. If you want an idea of the creepiness that I’m talking about, watch this video.

This mindlessness all serves a purpose, though. It’s clearly a satire on how we play video games and use our time. As Wired points out, “Part of Little Inferno‘s genius as a piece of satire is that it manages to be a fun game, despite constantly pointing out to the player how completely vapid and tedious what you’re doing is.” I mean, the game even tells you “Little Inferno Entertainment Fireplace was designed to not matter,” and yet players keep playing and enjoy playing it.

Again, it’s really hard to recommend this game. How would you even pitch it? “It’s a game where you throw stuff into a fireplace and watch it burn.” It sounds dumb. And maybe if it were just that, it would be dumb. But there is a whole other side to this game that I can’t talk about because it would completely spoil it. You’ve just got to play the game and trust me. It’s one of those games that is more exciting to think about afterward then to actually play it. But once you realize that’s exactly the point, it starts to make sense. If you want a fun way to pass the time, this probably isn’t for you. If you’re looking for something different, maybe something that will stick with you and you’ll think about for a while after you’re done, well, give it a try. You likely won’t regret it.