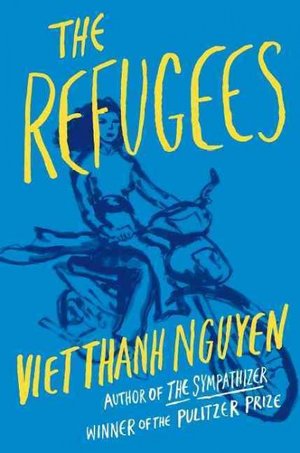 There are countless reasons one can think of on why many people choose to move far away from their mother land, be it to pursue one’s distinguished career in a promising foreign market, to settle down with a local, or simply look for better economic status. However, the term refugee would still be such an unfamiliar concept to most Americans until waves of Vietnamese refugees arrived in the US after the war just to be greeted with reservation, doubt, and even denial. Viet Thanh Nguyen, a Pulitzer Prize winner for his fiction “The Sympathizer” was a refugee himself. He frequently re-emphasized the importance of distinguishing between immigrant and refugee in his interviews. Undoubtedly, he has never failed to remind himself as well as his audience of his own status as a refugee through his works. What it was like to embark on the one-way journey to escape the Communists just to find themselves caught in a world of capitalism and the Western way of life countercultural to their own Asian ideologies is captured lively in The Refugees, a compilation of eight short stories.

Seeking refuge is probably the most despondent state of being an émigré one can imagine. One not only risks facing death during his escape, but is also confronted by the very real possibility of being deprived of a country, a home, and most importantly an identity. In “Black-eyed women,” the ghost of a boy—a loving brother and a dutiful son—is believed by his mom and sister to have swum thousands of miles from where he was murdered by pirates to the west coast of America, just so that every now and then when it pours at night he can visit his beloved in the old soaked well-worn clothes. It was revealed later that his younger sister – the protagonist was also “killed” in the incidence, or wraithlike, her existence being insignificant and only in the living’s mind could she find herself trapped with personal traumas many boat people share.

The book provides an account of the difficulties Vietnamese refugees had to face once they set foot on America, be it rebuilding their family or growing up in a country that presents so many cultural clashes with their Southeast Asian upbringing. The individual stories at first glance are bits and pieces of memories and experience that are completely unrelated with one another, but on a deeper level they are interconnected by a single thread woven by the characters’ Southern Vietnamese identity, their refugee status as well as their trouble adapting to a not-so-welcoming American society.

Nguyen in his interview with NPR admitted that “War Years” incorporated the most autobiographical materials among the eight pieces and thus reflects his family settling down in America and his upbringing quite precisely. The story depicts his struggle growing up balancing his two identities, one wild and trying to fit in with the American society and the other trying to conform to his parents’ expectations of a filial Vietnamese son. His parents, representative of the larger community of Vietnamese refugees, always tend to shrug off their own self when dealing with Americans and become completely different people from at home speaking their own language. The story also revealed a dark side of the contemporary status quo “that the politics of the war was not won, the war was not finished. People might like to think the war is done when a ceasefire is signed, but for most people who live through a war, it goes on for decades.”

In “I’d love you to want me”, Mrs. Khanh is a dedicated wife to her demential husband who would more often that not innocently break her heart by calling her Yen, a woman’s name long buried in the deepest part of his subconscious mind. Their sons and daughters, born and raised American, have their own lives and hardly contact their parents. All the communications among family members are carried out through a messenger, Mrs. Khanh’s youngest son, who would insist from time to time that she give up on her job at the local library, the only place she could comfort herself with a sense of purpose in life. At the end of the story, she gave up her job at the library and gave in to her husband persistently calling her another woman’s name.

Above all these grueling and discouraging circumstances, there always come tints of joy and comfort: the excitement Liem finds in his first experience with the Western world, where they can start a new life with a new identity, where they do not have to betray their sexual orientation in “The other man”, or the ecstasy of the boy in “War years” when he received five dollars from his conservative mom to finally do what he imagined a normal American kid would do: buy junk food at a 7-Eleven.

The book is filled with intertwinements of bright and dark, good and bad, pessimism and optimism, peace and calamity. The reminiscence of a childhood in beautiful countryside of Vietnam “follow my father down our village’s lanes and pathways, through jackfruit and mango groves to the dikes and fields” is also smeared with stains of memory flashes of a haunted country viciously struck by war, with ghastly images of “an upper half of a Korean lieutenant, launched by a mine into the branches of a rubber tree; a scalped black American whose eyes and the exposed half-moon of his brain glistening above the water; and a decapitated Japanese private groping through cassava shrubbery for his head”. In “Father land”, Phuong’s half-sister, Vivien, who escaped with her mom post-war, on her first (and last) homecoming trip reveals that her life in America is nowhere as wealthy as Phuong and her family in Vietnam imagines. That shatters the rosy lens Phuong used so religiously to look at the Viet-kieus (Vietnamese abroad) and disillusions her dreams of coming to American for better prospects.

That said, there is always light the end of the tunnel. That the Vietnamese was so admirably resilient even though the war mostly tore their lives beyond repair has been proven to be true by refugees and their children. The Refugees not only vent a desire for survival but also an aspiration for a better life, where they could provide their children with a carefree and protected upbringing, something they never once had. However, certain parts of the book also serve as a reminder that the negative impacts of the Vietnamese diaspora on this ethnic group are still very tangible in modern American society.