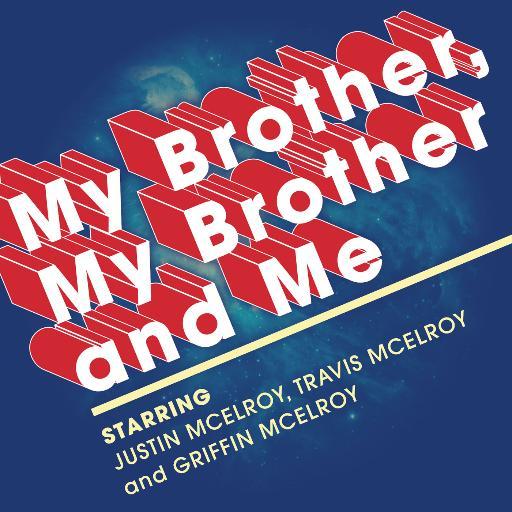 My Brother, My Brother, and Me is a short (6 episodes total) and up and coming TV show based on a podcast of the same name starring the McElroy brothers, Justin (the oldest brother), Travis (the middlest brother), and Griffin (the sweet baby brother) who give advice to people and try to solve their problems. The podcast itself is a hilarious advice show, and the new TV show follows suit. The whole show can only be found on Seeso.com, a comedy streaming website, and it is unlike any show I’ve ever seen. It had all the same sense of humor and ridiculous tangents in the podcast, yet the visual aspect and production team allows the show to go above and beyond. While the show is tremendous, it is really just one more thing the McElroy’s can put on there resume. The brothers produce many other weekly podcasts, and Griffin and Justin both create content for Polygon, a gaming website. However, the McElroy brothers never seems to run out of jokes (or goofs, as they would call them).

As an avid TV watcher and Podcast listener, I was incredibly excited to see the two mediums come together. The week before the premiere, Seeso live streamed one of their episodes followed by a Q&A by the brothers themselves on their Facebook page for subscribers and non-subscribers to see. A week later they uploaded all 6 episodes on Seeso.com for subscribers only. While the show differs from the podcast a little bit, they only answer one fan submitted question per episode as opposed to the multiple fan submitted and yahoo questions per podcast episode, the laugh out loud moments and warm fuzzy feelings remain intact.

Possibly one of the biggest differences from the podcast in the show, and the most charming, is the number of non-McElroy people featured. The podcast will sometimes have celebrity “guestsperts” (including Lin Manuel Miranda, Hamilton star and personal friend to the brothers), but they don’t usually like to bring outsiders in to their podcast. However, since the show was filmed in the brother’s hometown in Huntington, West Virginia, we got to see them comfortably (and uncomfortably) interact with a wide range of people, from local high schoolers to ghost hunters to the mayor of Huntington. All of these scenes were completely improvised and ridiculously charming. It really seemed like everyone was having the time of their lives.

What I found especially charming was how different these scenes were from most setups like this. Often when we think of comedians going out into the real world and interacting with regular people, the regular people are being pranked, made to feel embarrassed, or just generally confused while the audience laughs at them. In their Q&A, the McElroy brothers mentioned their distaste for this trope. They made a point to say that they wanted to interact with the people of Huntington to show how great their hometown is, and they were blown away by how funny and comfortable everyone was in front of the camera. Justin mentions in the Q&A that it was really important that the butt of the joke was always them and not the citizens of Huntington. In order to prepare the guests before shooting, they would tell them basically “we’re dummies, we’re gonna say dumb shit, react how you would normally react”. This allowed everyone to feel comfortable and have fun and make for a much funnier show. For example, in the one episode available to non-subscribers, Tarantulas and Travis Did a Hit, the McElroy brothers meet with the Mayor of Huntington to ask permission to throw a parade for tarantulas to try to “rebrand” them so a question asker’s wife will let him get a pet tarantula. The mayor puts up a very strict and mean persona by harshly rejecting their idea. However, he often broke character to laugh at their tangents. Keeping the guests in on the joke allowed different perspectives of comedy which brought about funnier jokes and a happier attitude than mocking or embarrassing anyone would.

My Brother, My Brother, and Me, and the McElroy’s across all of their content, manage to do what a lot of obnoxious, close-minded, comedians think is impossible: Being funny without being offensive. As white men from West Virginia, they know they come from a place of ignorance and they might make mistakes that will upset people, and they have in the past. However, when people tell them they made a mistake, they don’t get defensive, they don’t complain about “PC culture”, they immediately apologize and find a way to fix the problem. For example, in a fairly recent MBMBaM podcast episode, the brothers were answering a question from someone who didn’t know whether or not to correct people who repeatedly get their name wrong. Justin said that he personally didn’t care if people called him the wrong name, and that he believed that, in the long run, it didn’t really matter. Less than a day after the episode came out, Justin tweeted: “Hey. I joked on MBMBaM today about how unimportant I think names are and how I don’t mind being called the wrong name etc. I’ve since been reminded that for trans and non-binary folks, names are an important part of identity. If that bit bummed you out, I’m really sorry. We try really hard to be inclusive, but we’re limited by life experience and sometimes we sound like dunces. Thanks to those who reached out. Reminder: Keeping an open, humble heart to people who live different lives is the lowest bar we as humans have to clear.” This is just one of the many examples of these brothers listening and apologizing. While they acknowledge that they certainly don’t deserve any praise for reaching one of the minimum requirements of being a good person, it’s good to know that there is some comedy out there that cares about being good.

All in all, I can’t recommend this show enough. If you enjoy horses, haunted dolls, tarantulas, your favorite soda, tiny towns, and just some good brothers enjoying some good good goofs, ask your friends if they have Seeso or shell out the $3.99 for a months subscription and binge watch all 6 episodes with your friends. (

P.S. Tarantulas and Travis Did a Hit is still on Youtube https://www.youtube.com/watch? v=UK7y7POw0yA)

One thought on “Podcast and TV merge in new comedy show”