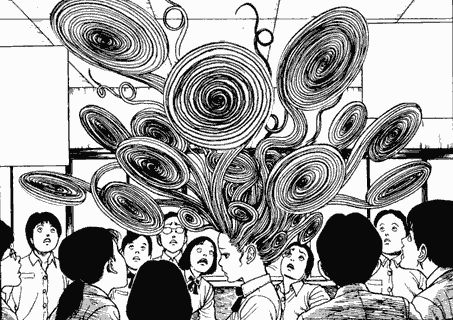 I was never a fan of Japanese horror. For a scaredy-cat like me, it takes a lot of courage to take on movies like Ringu or The Grudge. Although I am aware that there usually is a close connection between movies and comics as they are both under the umbrella of culture, my perception of Japanese manga is completely isolated from that of movies and bound to more lighthearted series like Doraemon, Naruto and Avatar. I never thought of trying out horror Japanese manga until one of my friends recommended Junji Ito, and I was hooked. I thought manga must be less scary than movies because I would have a better sense of control over the pages and can skim ahead to see what happens in the next boxes (which are inanimate anyways). I could never be more wrong.

The psychological horror of Junji Ito’s series never fails to blow my mind. They can be very disturbing to read, but at the same time by some magical force, constantly manage to draw me into the mysterious and bewildering world of these characters. These stories are simply irresistible.

One of Junji Ito’s two big horror manga series is Uzimaki (The Spira), which portrays the lives of people in a town cursed by the shape of a spiral. The whole series consists of mini stories, each having its own especially haunting plot. *SPOILER ALERT*

In one of the stories, a boy who often gets picked on by his friends for being slow starts developing a hump on his back, which makes his movements even more slow and heavy. It is discovered later that the hump is actually a snail shell and he was undergoing some metamorphosis process. Eventually the boy turns into a weird huge humanoid snail with a shell bearing a mesmerizing pattern of spirals. He was doubted by his own parents, disowned and thus retained by the school where he attended. Shortly after, there are more and more cases of people turning into humanoid snails. The story reveals towards the end that it was the curse of the spiral shape on the townspeople that those who are “outrun by time” would eventually be converted. The bold and ornate plot and illustrations effectively reflect a culture that puts so much emphasis on being on time that it creates a stressful and tangled rhythm of life.

This spiral shape went on to haunt the town, with no single person being able to find their way out. In “Medusa,” girls’ hair would just turn into spiral curls despite their efforts to tie, straighten or even cut them, as if they had a life of their own. They would suck in the nutrients of the girls’s body and grow back after being cut in a matter of seconds. The hair fight scene is absolutely horrific. Girls’ hair start showing off themselves, proudly growing longer in huge spiral curls and attracting people’s attention. The end is dramatic, with one of the girls turning into an emaciated corpse, her energy sucked up and her hair still flaunting its hypnotizing spiral curls. Uzumaki is like a canvas with messy combinations of “animal” and “human” parts in every person. It twists and distorts friendship, romantic and family love beyond recognition, just to serve a single purpose: to squeeze the darkest and most well-concealed side out of every person.

Junji Ito’s second big series is Tomie, which tells the story of a girl who seduced a classmate and a teacher at the same time, got into a conflict and in the heat of the moment was murdered and dismembered by her teacher and classmates, her body parts dispersed in different places. Strangely, Tomie cannot be killed. Every piece of her body has its own life and can regenerate itself into another normal Tomie. Tomie has different versions of herself all across different towns, every version having her own thoughts, but her grudge, viciousness and inhumanity are always present, bringing trouble to whoever she sets her eyes on. No one, regardless of age or sexual orientation, can deny Tomie’s beauty. The men who are into her are willing to give up on their career, their family and even their life to be with her, but at the same time they would also unhesitantly murder her, claiming that they love her too much and want her to belong to them forever. It is implied, however, that everyone thinks Tomie is at fault, that her tragedy was originated from such beauty she possesses in the first place. Junji Ito lets the character Tomie seduce men, manipulate and make them fight each other, which eventually leads to their deaths, hence making a statement that a woman born with exceptional beauty, contrary to the traditional Asian belief, is not at fault for their own mishaps. The fact that Tomie seeks revenge on men who fall for her, in a sense, encourages women to take a stand against unjust social prejudices against themselves.

Finally, Headless Statues is one of the single short stories that covers all aspects of life and society. The plot is about statues without head in a studio suddenly waking up one night and killing people for their heads. Soon these statues start fighting for the limited number of heads, which results in some quite disturbing scenes. This extremely odd story still sticks in my head for its well-hidden layers of meaning. I wonder whether the author simply came up with some kind of pure inexplicable evil or whether he meant to show artworks too desire to be completed and treasured, to have a certain meaning, or even nonpersons’ naive aspiration to become someone else.
That may seem overwhelming but the world of Junji Ito’s characters is a million times more colorful and fascinating. If you are into Japanese culture or merely want to try out something new, you might want to take some time to enjoy his unorthodox and bizarre way of navigating the world.