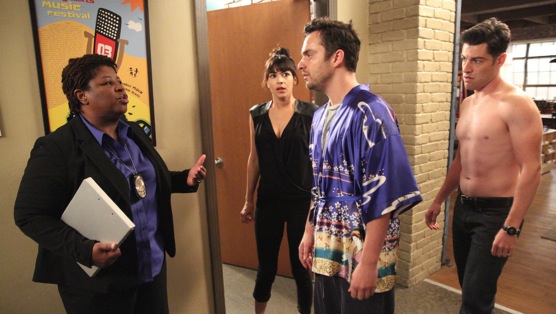 Very rarely does an episode from a mediocre TV show appear out of nowhere and change your life. Even more rarely is that episode a bottle episode. However, season 4 episode 6 of Fox’s New Girl aired years ago and completely changed everything I thought I knew about comedy.

This episode, called Background Check, starts with Winston (Lamorne Morris) warning everyone in the loft that, in order to pass police academy, his supervisor is coming over to perform a routine background check on his living space and roommates. This immediately causes tension as Jess (Zooey Deschanel) reveals to the rest of the group sans Winston that she accidentally acquired a bag of meth that she keeps in her closet. From that point on, the gang becomes increasingly stressed, sweaty, and ridiculous throughout this episode while trying to hide this comically large bag of meth from Winston and his sergeant. Not only is this episode absolutely hilarious, it also serves as a turning point for the show as a whole.

If you’ve had the same experience as me, you really liked New Girl when it first came out, but then slowly lost interest after a few seasons. I was certain New Girl was on its way down, but Background Check and its later seasons brought it back. This episode reminded me why I liked this show in the first place: the characters. With an episode so reliant on its characters, especially in a high-stakes situation, it really should have been no surprise that New Girl pulled through and made Background Check so remarkable.

Bottle episodes can be described as episodes with only one or two sets for the characters to interact in. They’re often considered cheap tactics TV shows use to save money leading up to a big and expensive episode. They’re usually inexpensive to make, especially if the set for the episode has already been built, like the loft in New Girl. However, because there aren’t any bells, whistles, or outside influences, the episode relies entirely on the writers and actors. Often writers will resort to an episode that is entirely flashbacks of the characters reminiscing on funny moments in past episodes. However, when a bottle episode is done right, it can be one of the best episodes of the entire show.

One of the most obvious examples of a good bottle episode is season 2 episode 8 of Community, Cooperative Calligraphy. In this episode, a lost pen causes the study group to trap themselves in the library and unleash all the judgements and negative energy they’ve been holding back on each other. This bottle episode is not only an obvious example because it involves strong emotions between the characters and takes place in a tiny room, but the media obsessed character, Abed, calls out the episode for what it is and even criticizes the trope by saying “I hate bottle episodes. They’re wall-to-wall facial expressions and emotional nuance. I might as well sit in the corner with a bucket on my head.” While Abed may hate them, bottle episodes have the potential to be amazing if the writers can pull them off.

The elements that make Background Check into a great episode, and that helped turn New Girl into a better show, include a mix of writing, acting, and even costumes. The dialogue is honestly gold. One of my favorite parts about the dialogue is the rambling done by all the characters at the same time. The first few times I watched Background Check, I would always notice a new joke someone mumbled that I hadn’t heard before. One of the best scenes in the episode is when the Sergeant performing the background check is alone with Nick, who confesses anything and everything that comes to mind that isn’t the meth that Jess, Cece, and Schmidt are trying to flush down the toilet just across the hall. This is one of those scenes you need to see yourself to fully appreciate, and I don’t want to give any of the confessions away before Jake Johnson has the chance to, but that scene alone is worth watching the whole episode.

Another element of this episode that I didn’t fully appreciate until I watched it again in preparation for this review was how the more subtle elements improved the comedy. While bottle episodes almost always rely completely on dialogue, the makeup and costumes played a very important part. Jess starts the episode looking normal and put together, but her appearance slowly transforms into a strung out drug addict’s when her stress makes her believe that the meth transferred into her body through her skin. Nick undergoes a similar transformation when the act of keeping a secret makes him sweat so much Schmidt makes him put on his dreaded kimono.

Background Check is not only the greatest bottle episode, it also was a pivotal point for the show. New Girl started out really strong with a large fanbase, but slowly fell into oblivion with every passing season. This happens to most shows, and I was beginning to think that New Girl had peaked and was about to run for a little too long, like so many other shows do. But Background Check completely turned it around. The season 6 finale aired on Tuesday and it highlighted just how much the show had improved in the seasons leading up to it. If you ever enjoyed New Girl, but have since given up on it, I strongly suggest you give it one more chance on Netflix. If anything, watch season 4 episode 6, and if that doesn’t motivate you to watch the rest, at least Landslide by Fleetwood Mac will be ruined for you forever.

2 thoughts on “The magic of bottle episodes: how “background check” saved New Girl”