When I arrived back at Vassar after a long winter break, I remembered how much I didn’t miss Deece food during my time away from campus. Our first night proved to be a Deece-appointment, so the next night my friends and I decided to brave the bitter cold and journey to an Arlington restaurant. We decided on Kismat, Raymond Avenue’s Indian eatery. 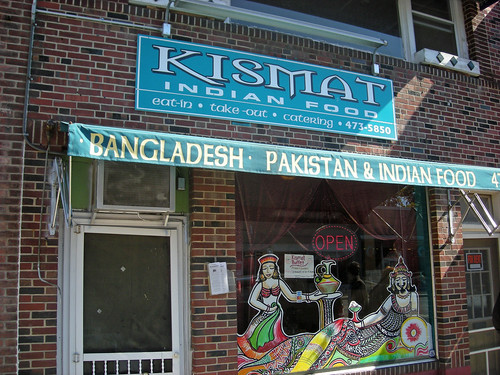 Indian food typically consists of curries, relishes, rice, and bread, all infused with a variety of spices that impart a unique and distinctive flavor to the cuisine. For an added dose of ethnic tang, I’d recommend ordering a dish featuring mango or coconut. I took the opportunity to do so and opted to try the Chicken Mango, which also provided me with my first taste of meat since returning to Vassar, since I actively avoid the questionable meat served in the Deece. However, if you abstain from all meat—not just that of the Deece—Kismat offers many vegetarian options, which are quite common in Indian cuisine. The Chicken Mango tasted pretty decent (minus the layer of oil on top) and filled me up quite quickly even though the portions seemed small at first glance; most of our party ended up taking leftovers back to their dorms. Kismat offers a generous amount of food for a modest price of about $10 per dish. Though all entrees are served with rice, that should not stop you from also ordering naan—a fluffy baked flatbread that nicely complements curries. Mango lassis are also a must.

The restaurant itself is small but cozy, boasting about seven tables in front of the open kitchen, which unfortunately produces a rather unpleasant cloud of greasy smoke around the dining room. While waiting for the food to come out, my eyes began to water and I felt like I was sitting in a deep fryer; I gasped for fresh air whenever a fellow patron opened the front door. The smoky air definitely distracted me from fully enjoying the food, but no other member of our party seemed too affected by the atmosphere, so you may not find it to be a problem if you decide to visit Kismat. Also a notably negative feature of the restaurant is the creepy bathroom, in which the toilet sits directly across from a shower that looks like it came straight out of a dilapidated corrective institution. I literally checked behind the curtain before using the bathroom to make sure that a murderer wouldn’t come out and stab me.

As for the service, the waitress didn’t seemed to pay us any attention unless we shouted or waved our hands around wildly. One would think that the servers would notice us since they only have a few tables to monitor; maybe they were lightheaded from inhaling too much smoke.

Overall, our party decided that we would return to Kismat due to the food quality, affordability, and close proximity to campus. Kismat also has a table in the College Center on Tasty Tuesdays, so you can sample their tasty food without wheezing through the smoky air of the actual restaurant. They also provide carry-out and delivery. Below, I’ve included a link to their menu.