Jon Stewart versus Sean Hannity, the Occupy movement versus the Tea Party, MSNBC versus FOX News–it doesn’t take an expert to appreciate the vast ideological split in our society’s political structure. From abortion to gun control, how is it possible for one country to be so polarized in its beliefs? A recent study at the University of California, San Diego (UCSD) suggests that biology may underlie such extreme differences in opinion.

Darren Schreiber, Ph.D is a ‘neuropolitical’ researcher at the University of California, Los Angeles and the University of Exeter. Along with a team of UCSD researchers, he conducted a study to determine how American liberals and conservatives differ in neural processing. Participants took part in a gambling game in which they were presented with three numbers (20, 40, and 80) for one second each. During the display of the number, subjects were to decide whether or not to press a button. Pressing the button during the display of ‘20’ would result in a gain of 20 cents; pressing it during the display of ‘40’ or ‘80’ would result in either gaining or losing that respective number of cents. Thus, while pressing the button during higher numbers offered a chance to win more money, it also carried with it the risk of loss. During this simulation, brain activity was measured using a functional MRI (fMRI), and results were compared with self-reported political affiliation.

There was no difference in behavior observed between Democrats and Republicans during this risk-taking simulation; however, there were significant differences in brain activity. When assessing risk, subjects who identified as Democrat displayed more activity in the left insular cortex, while those who identified as Republican showed more activity in the amygdala. (It must be taken into consideration that the sample group consisted of 60 Democrats but only 22 Republicans. It is unclear whether or not the greater proportion of Democrats skewed the results.) The left insular cortex has been associated in previous studies with both empathy and “theory of mind,” or the awareness of other’s and one’s own internal drives and states. The amygdala, on the other hand, is associated with emotion and fear processing, as well as one’s sensitivity to potential threats. 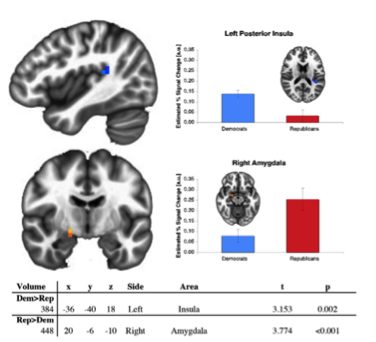 In addition to such differences in cognitive processing, the neural anatomy of liberals and conservatives may differ as well. A 2011 study of students at the University College London found that the amygdala occupied more space in the brains of conservatives, while the anterior cingulate cortex—an area associated with one’s ability to deal with uncertainty—was larger in liberals. (Again, the sample must be taken into account. When rating themselves on a scale of 1-5—very liberal to very conservative—no participants rated themselves as a ‘5.’ Thus, the experimental model was shifted to a scale of 1-4.)

These findings from UCL reinforce the conclusions drawn by Schreiber’s team. Essentially, Democrats seem better able to deal with the uncertainty of a risky decision, and more willing to make such a decision if the potential outcome holds promise for improving the situations of themselves and others. Republicans seem to have a greater sensitivity to possible threats, due to the amygdala’s role in the ‘fight or flight’ response. They tend to be cautious and wary of uncertainty, more likely to stick with tried-and-true methods. This dichotomy is clearly illustrated by the ongoing conflict over the Patient Protection and Affordable Care Act (‘Obamacare’), a bill which essentially proposes a revamp of the country’s healthcare system. During the Senate’s 2009 vote, all Republicans voted against the bill, while all Democrats voted for it.

Ultimately, analysis of neural activity during risk assessment remains the most accurate predictor of political orientation. Researchers correctly identified party preference 82.9% of the time when analyzing activity in the insula and amygdala, as opposed to 71.6% when basing predictions on relative grey matter volume, and 69.5% when using political preferences of the subject’s parents (a well-established predictor). Indeed, some researchers believe that these differences in cognitive processing may actually lead to changes in brain structure. It is not that liberals and conservatives are born with completely different brain anatomy; rather, their different methods of assessing decisions direct more blood-flow to certain areas over others, eventually resulting in anatomical differences. 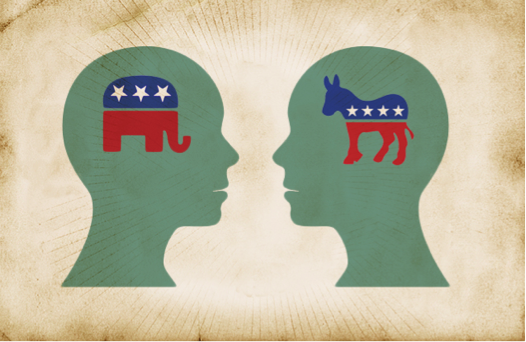 Unfortunately, no definitive answer has been found for the basis of such differences in neural processing between Democrats and Republicans. As research for more specific underlying factors continues, it is important for both groups to acknowledge that regardless of biology or belief, we are all human. In an age filled with political polarization and sensationalist propaganda, we would do well to remember this fact.

One thought on “The Neuroscience of Partisanship: Do Differences in Brain Activity and Anatomy Relate to Political Party Preference?”