In the words of famed theoretical physicist Richard Feynman, “I think I can safely say that nobody understands quantum mechanics.” Indeed, the field of quantum mechanics—also referred to as “quantum physics” or “quantum theory”—encapsulates what are possibly the most abstract and seemingly illogical scientific theories to date. But what, exactly, is quantum mechanics?

Quantum mechanics attempts to describe the behavior of particles on the atomic and sub-atomic levels. Prior to the start of the 20th century, the existing laws of physics—an object can’t be in two places at once, gravity makes objects fall to the ground, etc.—were seen as infallible, and presumed to apply to everything in existence. However, once scientists directed their attention to particles smaller than the atom, they realized that many of these “laws” were not as universal as once thought. What sparked this transformation of understanding was the observation that light acts both as a wave and as a particle, and can be defined as either depending on the experiment being performed. This discovery laid the groundwork for the later overhaul of the existing model of the atom, in which scientists proposed that it is impossible to know both the position and speed of electrons surrounding the nucleus at a specific point in time. Rather than visualizing electrons as occupying precisely-defined orbits, physicists now visualized electrons as occupying “fuzzy” regions of probability density around the nucleus. In other words, they had an idea of where electrons might be, but it was impossible to ever know for sure.

Beyond revolutionizing our model of the atom, quantum physics had also led to the emergence of ambitious new theories 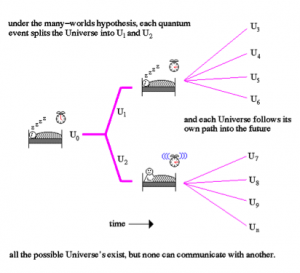 regarding the ultimate nature of the universe. The most well-known of these is known as the “Many Worlds” interpretation (MWI), which was introduced in 1957 by Hugh Everett. This theory posits that each time an event with multiple possible outcomes occurs, all outcomes are obtained, albeit in different “worlds.” In essence, ultimate reality consists of a branched framework of universes, in which every event that occurs spawns multiple universes (or “worlds”) of its own (see image to the right). Each of these worlds is real, but we are only aware of the one in which we exist. Think of it this way: in this world, you are living in New York. In another world, you may very well be living in Oregon, or Canada, or Germany. Every possible outcome for every decision you have ever made has been realized somewhere in this larger “multiverse,” and your ultimate essence can be described as the aggregate of every particle in every universe, in every state, that constitutes “you.” Confusing, huh?

Just recently, researchers at Griffith University (Australia) and the University of California, Davis proposed an expansion of the “Many Worlds” interpretation (MWI) to “Many Interacting Worlds” (MIW).  The belief that every possible outcome of a quantum event is realized in a different reality remains the same in this new theory; the main departure from MWI lies in how researchers describe relationships between these realities. MWI originally posited that the multitudes of realities spawned by one quantum event (i.e. a decision) are completely independent entities. MIW, however, posits that these parallel realities actually influence each other though a slight repulsive force, which aims to keep them from becoming too physically similar. This repulsive force manifests in the many quantum phenomena that have intrigued scientists for decades—for example, the dual nature of light as both a wave and a particle. Interactions between what we describe as “light” in different worlds leads to its acting as both forms of matter simultaneously. Whenever we observe light as a particle, omnipresent forces of repulsion also lead to its acting as a wave in a different world. In short, the nature of every possible outcome is mediated by the interactions between them.

Now, if you’ll excuse me, I’m going to go mop up my brain from the floor and then watch Netflix. Does watching Gilmore Girls in this reality mean that, somewhere else in the universe, I am diligently completing my biology homework? Can I somehow communicate with this other version of myself? (To this version of “me”: I admire your work ethic. Can you give me the answer to the third question?)