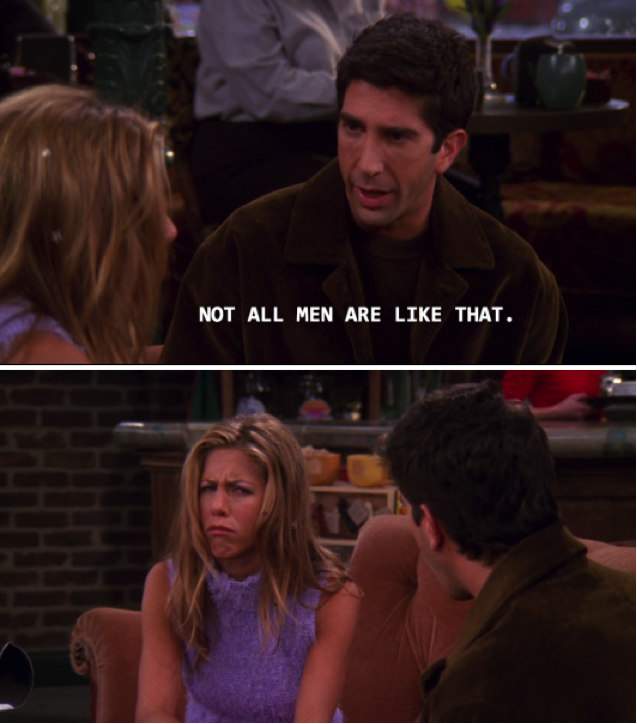 I had never watched Friends before it very recently went on Netflix in the beginning of 2015. By that point I had already seen all the other sitcoms where a group of straight white people have quirky shenanigans in New York City, but I had never seen the ‘original’ cult-classic obsession. So I started it, and as much as the wannabe-cynical-anti-mainstream-hipster part of me didn’t want to like it, of course I did. Gosh freaking darn it, I did, from the ridiculous yet often heartwarming plot-lines to the phenomenal nineties clothing. I quickly grew to admire Phoebe’s self-confidence, Rachel’s sass, and Monica’s determination, and I even enjoyed Chandler and Joey despite their tendencies to make me roll my eyes into the back of my skull. And despite the annoying laugh track.

But… Ross? Yeah, no, I wasn’t feeling Ross. At all. There was just something about…his hair? His tone of voice…? Something didn’t sit well with me. And then it all started rolling in. It was the fact that he had been in love with Rachel since his childhood, never said a word about it, and yet still proceeded to obsess over her and get upset and jealous when she was with other men. That was very annoying to me. And what do you know, the episode where Joey tells Ross that he’s in the friendzone with Rachel is actually how that the term was coined. DAMN IT, ROSS. Just add a fedora and you’ve got your modern day “I’m such a nice guy I’m a gentleman why don’t girls like me they only date jerks? Ugh I am being personally victimized.” There are too many examples to count of Ross being condescending and patronizing not only to Rachel but to everyone else as well. Not to mention the time when his son plays with a Barbie doll, where Ross proceeds to majorly freak out and try to shove G.I. Joe and monster trucks into his face because heaven forbid a toddler not recognize heteronormative gender roles!

Due to numerous previous experiences I have had, I typically have the tendency to assume that your average lacrosse bro type (not necessarily lacrosse, but you get the picture) is probably going to be the most misogynistic dude in the room. Yes, I recognize that this is an unfair assumption to make and I do wait until they actually do something horrid to confirm this belief, but I’m often correct. However, what I think is even worse than this type of bro is the bro that thinks that he is not a bro and therefore has a false sense of superiority that in reality makes him so much worse than your average bro. Maybe he doesn’t wear muscle tees, snapbacks, sunglasses indoors, and Adidas sandals with sock while maintaining a permanent odor of sweat mixed with Axe body spray, but this other type of bro has his own set of warning signs. Maybe he wasn’t cool in high school, maybe he was in love with the popular girl whose boyfriend was the all start athlete prom king, but either way he now has a permanent victim-complex that turns him into a self-righteous 24/7 pity-party machine. And this, my friends, is the Ross Geller Nice Guy Type. Be warned.